Writers, intellectuals, literary activists and book lovers from different parts of the world will, on Wednesday, November 16, storm Awka, the capital city of Anambra State for the 2022 Chinua Achebe Literary Festival and Memorial Lecture.

The Coordinator of the Society of Young Nigerian Writers (Anambra State Chapter), Mr. Izunna Okafor, made this known in Awka while giving update on the association's preparedness for the 2022 edition of the event.

According to him, Chinua Achebe Literary Festival and Memorial Lecture, initiated in  2016 and currently in its seventh edition, is a literary event the association annually hosts in honour of Nigerian literary icon, Late Prof. Chinua Achebe, in celebration of his life, works and legacies in the literary field and beyond. He added that this year's event will (as usual) hold on Achebe's birthday, November 16, 2022, at the Anambra State Central e-Library-Library, Awka, starting at 11.am; with many dignitaries and participants in attendance.

While revealing this year's theme of the event as “Literature, Intellectuals and National Development: The Achebe Model”; Okafor further disclosed that the 2022 Achebe Lecture will be delivered by the award-winning author, journalist and literary-cum-political activist, Uzor Maxim Uzoatu; while the National Vice President of Ọhaneze Ndị Igbo, Chief Damian Okeke-Ogene, will Chair the occasion.

He added that the occasion will feature the unveiling and presentation of the seventh Chinua Achebe Poetry/Essay Anthology, entitled “Achebe the Soul Brother”, which is the association's newest international anthology of poems and essays, published in honour of Achebe.

The annual international anthology, he explained, is one of the writers' way of immortalizing Achebe, and contains poems, essays, and reviews written and submitted by writers from different countries of the world, in response to the 'Call for Submission' earlier made by the association.

Okafor, a veteran author and journalist, said the 2022 event is expected to be graced by top government functionaries and literary enthusiasts, including the Executive Governor of Anambra state, Prof. Charles Chukwuma Soludo, who is expected to declare the event open; and the Traditional Ruler of Obosi, H.R.H. Igwe Chidubem Iweka, who is the Royal Father of the Day; among other dignitaries.

He said the open-to-all event will also be graced by arrays of literary icons from within and outside the country, who will be storming Awka to honour the legendary Achebe.

Born November 16, 1930, Prof. Chinua Achebe, who hailed from Ogidi in Anambra State, was a foremost Nigerian writer and critic, and author of Things Fall Apart. He died on March 21, 2013, at the age of 82. 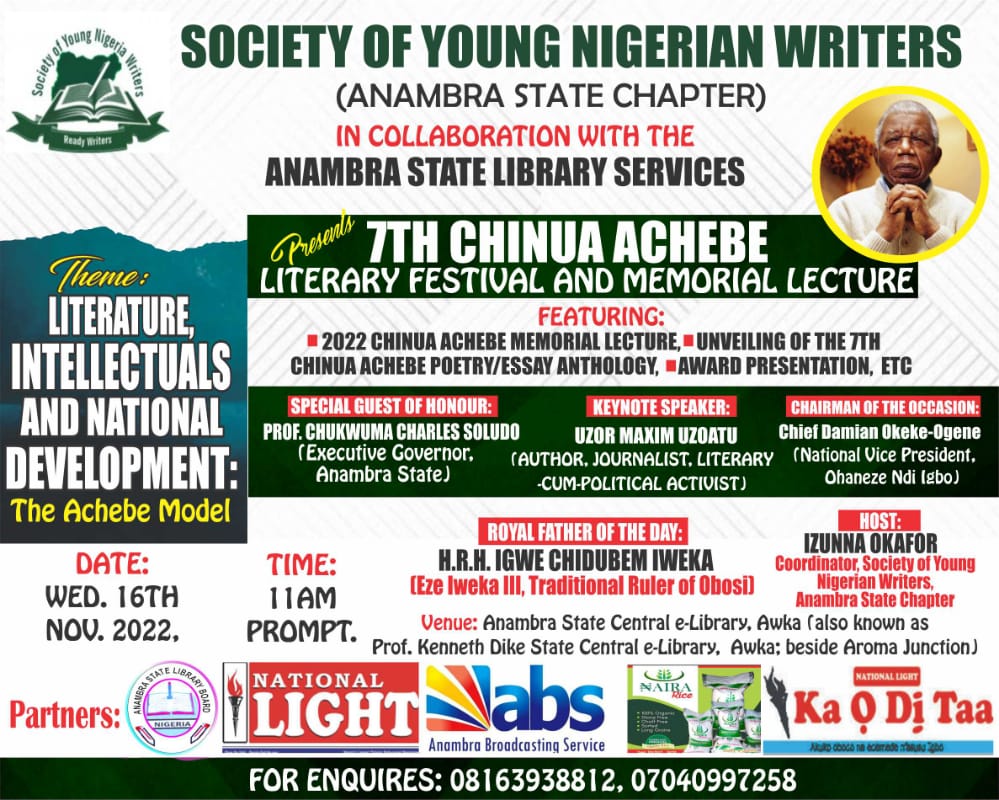 Read More
Reply · Share · 261 Views · Report · 2
Attention
We use cookies to serve you better. We have to let you know this in accordance with EU laws. You accept our terms and conditions by using this platform. Please Click on the OK button below to hide this message
OK, I Accept