This was disclosed by Izunna Okafor, the Coordinator of Society of Young Nigerian Writers (SYNW), Anambra State Chapter, which is the literary body that organizes the Chinua Achebe Literary Festival and Memorial Lecture

According to him, Chinua Achebe Literary Festival, which is in its sixth edition now, is an annual literary event held in honour of Nigerian literary icon, late. Prof. Chinua Achebe, in celebration of his numerous accomplishments and great legacies in the literary field and beyond. He further said that the event, which started since 2016, will (as usual) hold on Achebe's date of birth, November 16, 2021, starting at 11.am, at the Anambra State Central E-Library, Awka, Anambra State capital, with many dignitaries in attendance.

While revealing that last year's Achebe Memorial Lecture was delivered by former SSG of the state; he further explained that this year's event will be chaired by former Chief Judge of Anambra State, Prof. Peter Umeadi, who is also a literary enthusiast; while Sir Chuka Nnabuife, an award-winning author and accomplished journalist will deliver the Achebe Lecture.

In his word, "The event will feature Achebe Lecture, dramatizing of Achebe’s selected books, spoken word poetry, announcement of the winners of the 2021 Chinua Achebe Essay Writing Competition (endowed by the Anambra Newspapers and Printing Corporation, for secondary school students), special reading, award presentation, among other literary packages slated for the day.

The annual event, he noted, will also feature the cutting of Achebe's 91st posthumous birthday cake, as well as the official unveiling and presentation of the Sixth Chinua Achebe Poetry/Essay Anthology, entitled 'There Was a Man', which is the association's newest anthology of poems and essays published in honour of Achebe. The annual international anthology, Okafor explained, is used to immortalize Achebe, and contains poems, essays, and reviews written and submitted by writers from different countries of the world, in response to a 'Call for Submission' earlier made by the association.

Izunna Okafor, who is also a 2015 Winner of Nigerian Writers Award and brain behind the initiative, further disclosed that the 2021 Literary Festival, themed “REMEBERIG ACHEBE... IN A TIME LIKE THIS” is expected to be graced by many national and international literary figures, and top government functionaries, including the Executive Governor of Anambra state, Chief Dr. Willie Obiano, who is expected to declare the event open, as well as the President of the Association of Nigerian Authors, Mr. Camilus Ukah, among others.

Born on November 16, 1930, Chinualumogu Albert Achebe (popularly known as Chinua Achebe) was a foremost Nigerian literary legend and critic, who died on 21st March, 2013  at the age of 82. 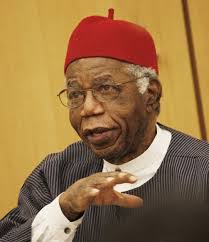 Read More
Reply · Share · 1.3k Views · Report · 1
Attention
We use cookies to serve you better. We have to let you know this in accordance with EU laws. You accept our terms and conditions by using this platform. Please Click on the OK button below to hide this message
OK, I Accept