It promises to be another literary reunion for authors and literary enthusiasts from Nigeria and other countries of the world, as young writers in Anambra State, under the umbrella of Society of Young Nigerian Writers (Anambra State Chapter), set to host the 2021 Chinua Achebe Literary Festival and Memorial Lecture.

The Coordinator of the group, Izunna Okafor, disclosed this in Awka, the Anambra State capital, while giving update on the association's preparedness for the next-week-Tuesday event.

According to him, Chinua Achebe Literary Festival, which is in its sixth edition now, is an annual literary event held in honour of Nigerian literary icon, Late Prof. Chinua Achebe, in celebration of his life, numerous accomplishments and outstanding legacies in the literary field and beyond. He further said the event, which started in 2016, will (as usual) hold on Achebe's date of birth, November 16, 2021, starting at 11.am, at the usual venue —Anambra State Central E-Library, Awka, with many dignitaries in attendance.

He revealed that this year's Chinua Achebe Memorial Lecture will be delivered by the Managing Director and Chief Executive Officer of the Anambra Newspapers and Printing Corporation (ANPC), Sir Chuka Nnabuife, who is also a veteran journalist, accomplished author, and 2015 winner of Gulder Ultimate Chase; while former Chief Judge of Anambra State, Prof. Peter Umeadi, will chair the occasion.

In his word, "The event will feature the Achebe Lecture, drama, spoken word poetry, announcement of the winners of the 2021 Chinua Achebe Essay Writing Competition (endowed and sponsored by the Anambra Newspapers and Printing Corporation, for secondary schools), announcement and recognition of outstanding entrants for the 2021 Chinua Achebe Poetry/Essay Anthology, special reading, award/certificate presentation, among other literary packages slated for the day."

He also added that the annual event will also feature the cutting of Achebe's 91st posthumous birthday cake, as well as the official unveiling and presentation of the Sixth Chinua Achebe Poetry/Essay Anthology, entitled 'There Was a Man', which is the association's newest anthology of poems and essays published in honour of Achebe. The annual international anthology, Okafor explained, is the writers' one way of immortalizing Achebe, and contains poems, essays, and reviews written and submitted by writers from different countries of the world, in response to a 'Call for Submission' earlier made by the association.

Izunna Okafor, who is also 2015 Winner of the Nigerian Writers Award and brain behind the initiative, further disclosed that the 2021 Literary Festival, themed “REMEMBERING ACHEBE... IN A TIME LIKE THIS” is expected to be graced by top government functionaries and literary enthusiasts, including the Executive Governor of Anambra state, Chief Dr. Willie Obiano, who is expected to declare the event open; the state's Commissioner for Information and Public Enlightenment, Mr. C-Don Adinuba; the state's Commissioner for Culture and Tourism, Dr. Kenneth Anierobi; the Principal Secretary to the Governor, Sir Willie Nwokoye; as well as the Traditional Ruler of Obosi, H.R.H. Igwe Chidubem Iweka, who will also be the Royal Father of the Day.

While revealing that the National President of the Association of Nigerian Authors, Mr. Camilus Ukah, will also attend the event; Okafor further highlighted some of the other literary figures and literary enthusiasts expected at the event, to include: veteran Nollywood actor, Bob-Manuel Udokwu; James Eze (author of 'Dispossessed' and 2020 Winner of the ANA Poetry Prize); Okeke Chika Jerry (author of 'The gods Are Hungry' and 2021 Anambra governorship candidate); Uzor Maxim Uzoatu (author of 'God of Poetry'); Rev. Fr. Ositadimma Amakeze (author of 'The Last Carver'); Isidore Emeka Uzoatu (author of 'Vision Impossible'); and Dr. Paul Ifeanyi (author of 'The Pregnant Virgin')

Continuing, he added that the first female Professor of Mass Communication in Nigeria, Prof. Stella Okunna; the Head of Department, English Language and Literature, Nnamdi Azikiwe University, Prof. Jane Ifechelobi; public affairs analyst, Sir John Ifejika; and international actor/award-winning author, R.C. Ofodile, are also expected, among other dignitaries, young and established writers from within and outside the country, storming Awka, to honour the legend, Achebe.

Asked whether this year's preparation for the event was in any way affected by the recurrent sit-at-home orders in the east and the recent governorship election in the state; Okafor, who responded in affirmation, said their planning was seriously affected and slowed down by the duo, to the extent that they had to pause at a point and wait for the election to come and go, before proceeding with their planning.

He said, "Unlike in 2017 when the governorship election held even very close to the event day (two days after our event), this year's own was very serious, because the environment well charged, coupled with the recurrent sit-at-home, which instilled fear in the people, kept many away from office and even crippled movement and other activities in the state.

"It happened to the extent that we had to stop at a point and wait for the election to come and go before proceeding with our planning; and you know what that means, because we have just few days left after the election and the supplementary election. But we thank God that we have come a very long way in our preparation, despite the challenges."

"And, judging from what I am seeing," he continued, "I am very optimistic that this year's edition of event will be very much greater than the previous editions. You can see the caliber of people on our guest list. Postponing or suspending the event is not an option, because, for the past six years, we have always hosted it on Achebe's birthday. So, why not this year? Achebe himself wouldn't have done otherwise if he were alive, and you know that. In fact, he is already waiting for us on 16th, and we are very ready for him." 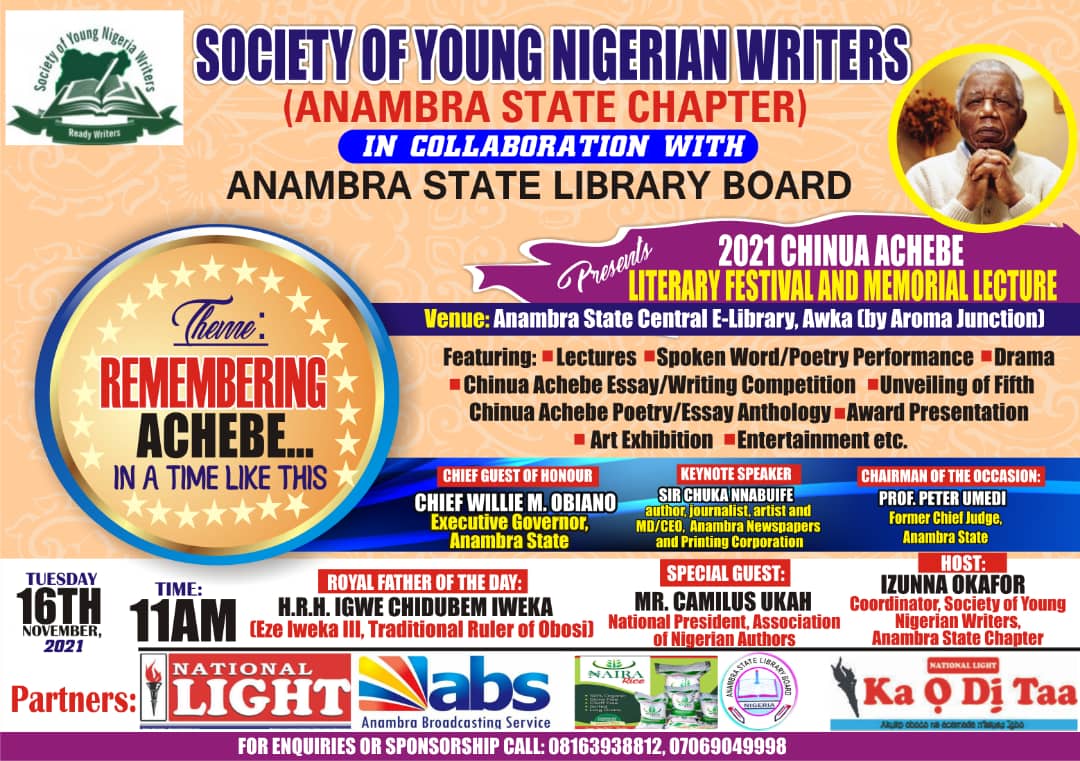 Read More
Reply · Share · 1.4k Views · Report · 2
Attention
We use cookies to serve you better. We have to let you know this in accordance with EU laws. You accept our terms and conditions by using this platform. Please Click on the OK button below to hide this message
OK, I Accept