History will again be made on Monday, the 16th day of November, 2020, as young writers in Anambra State, Nigeria, set to mark Achebe's 90th posthumous birthday with a literary festival and maiden memorial lecture.

The event, Chinua Achebe Literary Festival And Maiden Memorial Lecture, is organised by the Society of Young Nigerian Writers, Anambra State Chapter, in memory honour of Chinua Achebe, a renowned Nigerian literary icon, also reputed  to be the Father of African Literature.

According to the Coordinator of the Society of Young Nigerian Writers, (Anambra State Chapter), Izunna Okafor, the Maiden Chinua Achebe Memorial Lecture, which is the first of its kind, will be delivered at the 2020 Chinua Achebe Literary Festival.

He noted that the Chinua Achebe Literary Festival which started in 2016 and which is in its fifth edition now, will feature, lectures in memory of Achebe, dramatizing of Achebe’s selected books, open microphone/spoken word poetry, announcement of the winners of the 2020 Chinua Achebe Essay Writing Competition (sponsored by the Anambra Newspapers and Printing Corporation, for secondary school students), art exhibition, award presentation, among other literary packages slated for the date.

The annual event, he noted, will also feature the official unveiling and presentation of the Fifth Chinua Achebe Poetry/Essay Anthology entitled "Achebe: A Man of the People" (which is the association's newest collection of poems and essays published in honour of Achebe). The annual international anthology which is used to immortalize Achebe, Okafor says, contains poems and essays and reviews written and submitted by writers from different countries of the world, in response to a 'Call For Submission' earlier made by the association.

Izunna Okafor, who is also the initiator of the Chinua Achebe Literary Festival, further disclosed that the 2020 literary festival, themed "Chinua Achebe: Our Heritage In A New Normal" which is done in collaboration with the Anambra State Library Board, will, as usual, take place on Achebe's date of birth (16th November) at the State Library, in Awka, Anambra, Achebe's home-state, starting at 10:AM.

In his word, "The Maiden Chinua Achebe Memorial Lecture will be delivered at the event by Mr. Oseloka Henry Obaze who is a very good friend of Achebe, a writer, art enthusiast and former Secretary to the State Government in Anambra State; under the distinguished chairmanship of the MD/CEO, Anambra Newspapers and Printing Corporation, Sir Chuka Nnabuife, who is also an author, art curator and veteran award-winnig journalist."

The 2020 Chinua Achebe Literary Festival And Maiden Memorial Lecture is expected to be declared open by His Excellency Chief Willie Obiano (the Executive Governor of Anambra State) who will grace the occasion as the Chief Guest of Honour; while Prof. Peter Umeadi, art enthusiast and former Chief Judge of Anambra State will be a Special Guest of Honour.

The 2020 Chinua Achebe Literary Festival will be transmitted live by DigiTV, and will also have the presence of the State's Commissioner for Culture and Tourism, Dr. Christian Madubuko; veteran Nollywood Actor, Bob-Manuel Udokwu; the Director General, Digital Entrepreneurship Office, Ifeanyi Anagoh, among other dignitaries, young and established writers from within and outside the country. 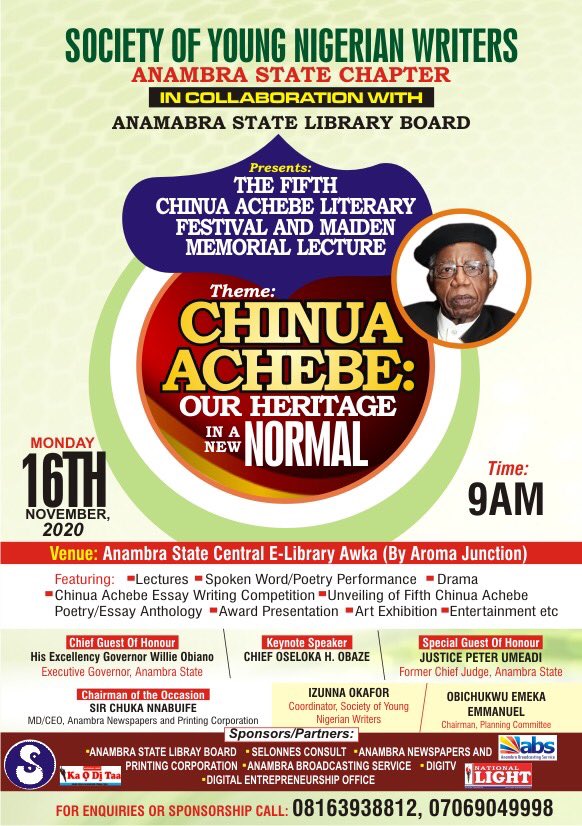 Read More
Reply · Share · 2.4k Views · Report · 2
Attention
We use cookies to serve you better. We have to let you know this in accordance with EU laws. You accept our terms and conditions by using this platform. Please Click on the OK button below to hide this message
OK, I Accept