Book Title: Verdict of the Gods

When gods choose not to let the rain drop, the effort of a rain maker is in vain. The birds of the air always feel betrayed and confused when a thunderous fart is released in the air by an unknown spirit. The land, water and the entire space of Achara which has experienced in the past, peace and transquility, turns into a mourning zone. Night visited Achara community in a broad daylight.Iwu Jeff's play, Verdict of the Gods is an epic tragedy. It exposes a land in turmoil. But the big question is: can sins of fathers be visited on their children?

Sleep has become a stranger to the eyes of the citizens of Achara. Eze Obioha, the traditional ruler of the community is disturbed;  his emotions restless. An elder cannot fold his arms and watch a goat suffer in parturition. He seeks measures to dispel the spell wreaking havoc in his land as a leader who has the well being of the people at heart, and consequently, his family suffers the same endemic,. He's traumatised and unrelentingly quests for answers and solutions to the plight of his people.

EZE OBIOHA : My daughters are down, they can no longer speak...we have followed every smell our nose can perceive, yet we have not seen any rotten thing. Where is the smell of evil coming from? Oh! My ancestors, please give us another eye, another nose, another ear and mouth. The ones we are wearing have no use ... Our gods are silent my people. I am not spared from this calamity. The spell is everywhere...

Eze Obioha being a leader who feels the pain of his people, he continually summons his cabinet members to put heads together to find lasting solutions to their problems. The cry of his people has become a thorn on his fresh and he sometimes laments to the gods questioning them on the ways his community or himself has wronged them.

EZE OBIOHA: ...my son died two nights ago; before he died, an extra hand came out through his chest. My daughter was suddenly struck with imbecility... Who did my fathers offend?

Countless questions are asked and ountless visitations, made to the shrine of different Dibias but all efforts prove abortive. The gods remain remain 'mute' and 'tongue-tied', refusing to draw humans to the closer view of their boiling angers. Drought and famine become two beautiful maid married without a bride price, gummed like bedbugs to their land and refusing to leave. Death toll keeps multiplying on daily basis. The living prefers death as solutions are not in sight. Who will save the dying land?

Amidst the seriousness of the play, Iwu introduces two characters: Ezemma and Nwokeocha, who are members of the cabinet to ease the tension arouse by the unfolding events. These two revered men help to crack the ribs of the readers with comic banter.

EZEMMA: what am I saying? Wisdom! Wisdom! Igwe, I am full of...[Nwokeocha intrudes]

EZEMMA: will you shut up and listen to...

NWOKEOCHA: What wisdom can one possibly get from a lunatic? I do not blame you; a child that suckled a goat's milk will definitely act like a goat even in his old age. You need to return to your mother in her grave so you can have a taste of her breast milk.

EZEMMA: [Rises and faces Nwokeocha] How dare you call my dead mother into this? I see, you have really want to show me that you have grown enough hairs around your manhood.

NWOKEOCHA: [Stands up, pointing a finger at Ezemma] And you whose hairs are now overgrown into a forest, you need to be weeded...

This play is both revelational and revolutional. On the former, Iwu reveals that there's more to scapegotism as a concept. Some great African writers Wole Soyinka, Femi Osofisan and a host of others in their various plays, but Verdict of the Gods introduces a new scapegotism. However, on the latter, it demolishes the stereotype created  in most African writings, where the  God of the new religion is often given ultimate power of purifying African lands of its mess. In Verdict of the Gods, it is different as the  African gods reign supreme in sanctifying their people and their lands of sins.

The masterful ink of the playwright is laudable in his ability to select suitable words for his characters. The social standing of his characters are discernable through the quality of their language. Every scene in this play is opened with a beautiful African proverb dancing into your eyes and the use of African proverbs by the characters show the rich culture of Achara community.

The cover design of the play has great significance in the over development and arrangement of the play. Its from cover has the head of three gods joined together in a threesome unity. However, the play is not arranged in Acts and Scenes but it's divided into three - Beginning, Middle and End. The use of three gods has Biblical allusion of God the Father, Son and HolySpirit. That's, the Trinity in one God. In this play, one discovers that these Gods are one and their verdict is equally one. Despite the deviation from play's convention of Acts and Scenes, the play maintains the three unity of place, time and event which solidifies its beauty as a play. Although some might raise alarm on his use of uppercase in 'Gods' but I don't think he has committed as grammatical blunder on that. I think, it's a question of choice.

Iwu Jeff ( Iwuchukwu Jephta) is an award-winning writer who has written in the three genres of literature - poetry, drama and prose. His works have gained homes in different Anthologies and online publication.

From the beginning, through the middle and to the end, the play is suspensely decorated and readers won't have any reason to drop it for a moment until one gets to the very end. Are you ready to discover the verdict of the gods for Achara people? Are you equally ready to discover how a wounded lion got its healing balm? Grab your own copy of Verdict of the Gods. 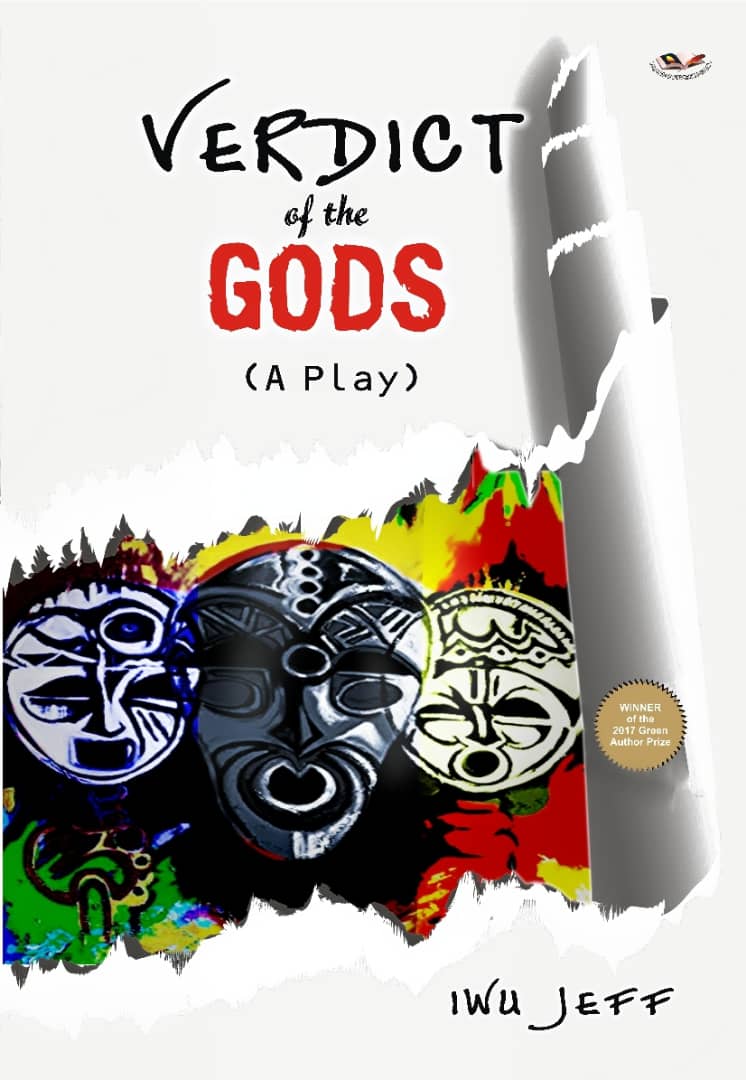 Read More
Reply · Share · 455 Views · Report · 3
Attention
We use cookies to serve you better. We have to let you know this in accordance with EU laws. You accept our terms and conditions by using this platform. Please Click on the OK button below to hide this message
OK, I Accept