It was Haruki Murakami who once said that death is not the opposite of life, but a part of it —an aphorism buttressed strongly by George Eliot's apothegm that "Our dead are never dead to us, until we have forgotten them."

It is on these long-standing witty sayings that the Nigerian literary community received the her first shocking news of 2020, that foremost Nigerian novelist, who was also the Traditional Ruler of Ndikelionwu Kingdom in Orumba North Local Government Area of Anambra, Eze Prof. Chukwuemeka Ike has gone asleep.

The news which ushered in the dawn of the second Thursday of the year was hitherto faulted and scored a grapevine, to the credit of two points —the source from which it came, and the terminology with which it was broken.

Secondly, no one is authorised to disclose such information (that the king is sleeping) except the affected community's cabinets or Council of Elders, in agreement with the members of the royal family or the ruling dynasty, as the case may be.

Although, people, especially the closest relatives or community members may be aware that the king has fallen asleep, they won't dare disclose it or tattle over it, pending an authorised disclosure by the right source.

Little wonder why, when interviewed on the hideous development, a stakeholder from the Ndikelionwu Community, Prince Emma Okoli-Ijeoma said, “'As far as I am concerned as a member of the ruling house in this Ndikelionwu Ancient Kingdom, I am saying that Prof. Chukwuemeka Ike Eze Ndikelionwu, the 11th of Ndikelionwu is not yet dead!

In our tradition, nobody opens his mouth to tell outsiders that the Traditional Ruler is dead. You don’t say it because according to the customary law of Anambra state, king doesn’t die!

"If at all there is anything of that nature, one would say the king has joined his ancestors. It is not the duty of anybody to tell outsiders that the king is dead. It is after the royal family has met and agreed before such thing would be announced. Not just a rifraf would come and say what he doesn’t know!

"So I am saying that as far as the royal family is concerned, we have not announced anything to the public, that is, if something really happened."

Also, in most cases, the Elder In Council may not even announce the news, except a replacement or heir is found, especially in a situation where the crown is rotational.

These formed the basis upon which the news of Prof. Chukwuemeka Ike joining his ancestors was held in the air on arrival.

Be it as it may, succeeding sunset and sunrise have unmasked and unearthed the rock.

As Nze Prof. Chukwuemeka Ike rests on in his ancestral home and palace, Ndikelionwu, literary enthusiasts, fans and some other stakeholders in the country have continued to register their feelings and pour their tributes to the legend.

Breaking the news, the Anambra State's Commissioner for Information and Public Enlightenment, Mr.  C-Don Adinuba said, "Goodnight, Prof Chukwuemeka Ike. We all drank from the fountain of The Bottled Leopard as students to assuage our curiousity for mystery. We were stunned by the shenanigans of Expo ’77 and thrilled, to no end, by Sunset at Dawn.

“As you join your ancestors, let’s pray you never stumble from The Chicken Chasers or undone by Conspiracy of Silence. Adieu, a great man of letters, a king who wore humility like a robe.”

On his own part, the Executive Governor of Anambra, H.E Chief Willie Obiano said, "I am saddened by the death of HRM Eze Chukwuemeka Ike. He was always a regal presence around us here, bringing his wealth of experience to bear on the deliberations of the Traditional Rulers Council. We shall sorely miss him. But we shall also find strength and consolation in his exemplary life and the legacies he left for mankind through his literary works and stellar contributions to the traditional institution in Anambra State.”

“He will be remembered for his classics: "Toads for Supper" and "Sunset at Dawn" among others. May he rest in peace."

In similar tones, other literary enthusiasts and concerned Nigerians have also bared their minds thematically on the development, ruefully registering their reactions to the news and their tributes for the legend, as collated below:

Denja Abdullahi, immediate past President of the Association of Nigerian Authors (ANA) says:

"Prof. Ike's death was sad all the same but it was not a shock because he was an old man. He was a contemporary of all other first generation of Nigerian writers and his death was like the end of an era. We could say that the last of the titans has gone home.

Tributarily, Abdullahi said, "Prof. Chukwuemeka Ike was a productive writer of several novels with interesting stories and catchy titles. You could locate his works between the popular and literary fiction genre. He was a very good satirist of the human condition.I feel that he was not celebrated enough like some other people feel. It may be because of his self-effacing nature and unwillingness to indulge in needless literary and critical controversies.

"He has gone beyond just being a writer to contribute to the development of the Nigerian Book Industry through his Nigerian Book Foundation. He was always there anywhere you invite him to if it had to do with writing,writers and the books.

"Prof Chukwuemeka Ike will live eternally in the minds of all of us through his evergreen stories of the foibles of man."

"The passing of HRM Prof. Chukwuemeka Ike, Eze Ndikelionwu is numbing.   He was an exceptional, gifted, resolute and most unassuming person.  I was privileged to be considered his friend and welcomed freely into his palace. He was chair of my book presentation in 2018.

His tribute: "Eze Chukwuemeka Ike lived life fully and made enduring contributions to our educational system, literature, cultureand traditional institution. He motived many writers, even those who never met him personally.

"He has immortalized his name and his footprints will linger for years to come.  May God grant him eternal rest and his dear wife HRM Bimpe Ike, the fortitude to bear the loss."

"I was in deed shocked when I heard the sad news over the radio. I wished he stayed a bit longer so that this generation of ours will have tapped a lot more from his wealth of wisdom.

"But I believe Professor Ike is not totally dead and he will never die completely because all his works are still breathing all over the world. "Rest in peace Papa ndi authors."

"This is a huge loss. Chukwuemeka Ike was a great inspiration to a lot of writers who came after him. The choice of subject matters he treated in his novels spoke a lot about the kind of man he was and the whole essence of his writing.

"He was never complex in his style and or his plot and that led us easily into the wonderful worlds he created. These worlds would live forever with us. Through them, we would keep remembering him. May his gentle and kind soul find eternal peace."

"I received news of his demise with sighs. I'm told Professor Ike is asleep, which is a correct phrase to apply to a traditional ruler. His subsiding into sleep did not shock me. He lost his only child three years ago. It must have been a massive blow, and he was also in his late 80s."

Tribute: "Eze Ike was an engaging, fluent and satirical writer. He created fascinating characters and witty, wicked situations. I remember 'Sweetie' in TOADS FOR SUPPER, 'Peace Bozo' in THE CHICKEN CHASERS, 'Mrs Ikin' and 'Dr Okoro' in THE NAKED GODS... and many others.  I recall his books appeared under the FONTANA imprint, not the AFRICAN WRITERS' SERIES."

"Prof Ike's death is indeed a loss to the nation, particularly to the literary class.Though he lived to old age, death, particularly of an icon always evokes shock to the living; so I feel shocked by his death as his other admirers .

"Prof. Ike was among the respected writers, in the same class as Chinua Achebe, for which Umuahia Govt college was renowned. He produced novels that dealt with topical issues of his time.

"Above all, Prof. Ike was a man imbued with tenacity of purpose. He never wavered on any issue he was convinced about. This quality of his was manifested when I worked with him, a few years ago, on an Igbo project for which we were appointed by the Anambra State Govt.

May the Lord grant him eternal rest, amen."

Untill he slept off, Eze Prof. Chukwuemeka Ike (born on April 23, 1931) was award-winning and pioneer Nigerian writer, known for a mixture of lampoon, humor and satire, a writing style believed to be tied to his Igbo cultural upbringing.

He attended the Government College, Umuahia, where he started writing for the school magazine, The Umuahian, which published his first ever written story —‘A Dreamland,’ a work which set his foot on the literary space.

Some eminent Nigerian writers who attended the school include Chinua Achebe, Christopher Okigbo, and Ken Saro Wiwa, among others.

A graduate of the University College, Ibadan, Prof. Ike made a plethora of impacts and left great legacies in the literary and academic fields, and was conferred the Nigerian National Order of Merit (NNOM) Award which is Nigeria's highest and most prestigious national prize for academic and intellectual attainment, making him the second Novelist to receive the award since its inauguration in 1979, the first being Prof. Chinua Achebe.

He was also the President of the Nigerian Book Foundation, as well as the first Nigerian to be the registrar of the West Africa Examination Council (WAEC).

As Prof. Chukwuemeka Ike peacefully joined his ancestors, Nigerian literary community, fans, and the world at large heartily bid him farewell and wish him eternal repose in the world of immorality.

Izunna Okafor is an award-winning Nigerian Novelist, Poet, Journalist, Essayist, Editor, Translator, Publicist, Igbo Language Activist and Administrator who hails from Ebenator in Nnewi South L.G.A of Anambra State Nigeria. He writes perfectly in English and Igbo languages, and has published several books in both languages.

Izunna has received over 25 awards, and has over 2000 articles published online, both nationally and internationally.

He can be reached via: izunnaokafor70@mail.com 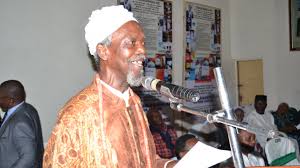 Read More
Reply · Share · 2k Views · Report · 1
Attention
We use cookies to serve you better. We have to let you know this in accordance with EU laws. You accept our terms and conditions by using this platform. Please Click on the OK button below to hide this message
OK, I Accept