A job scam was used to trick this woman into marrying a total stranger. Sounds funny buy she signed a marriage document thinking she was role playing and proving she could work as a wedding planner.

The woman has said she was told that she had to play the role of a bride in a simulated wedding as part of her training to be a wedding planner.

During the ceremony she and the man signed a genuine marriage document.

She only realised she was actually married after returning to Hong Kong, where she sought legal help.

Local police were unable to help due to a lack of evidence that a crime had taken place, so she approached the Hong Kong Federation of Trade Unions (FTU).

"It's a new form of marriage scam," Tong Kamgyiu, director of the Rights and Benefits Committee of FTU, told the BBC.

"I feel disappointed and cannot believe it's even happening in modern Hong Kong."

She remains married for now and may have to apply for a divorce. It is unclear who the man she married is, or if he entered Hong Kong after the marriage.

"The 21 year-old lady was taken advantage of while she knew nothing about the circumstances," said Mr Tong.

"Her biggest loss is to have a marriage record and it has caused her psychological damage."

Chinese residents who are married to a Hong Kong partner are able to apply to reside in the city. 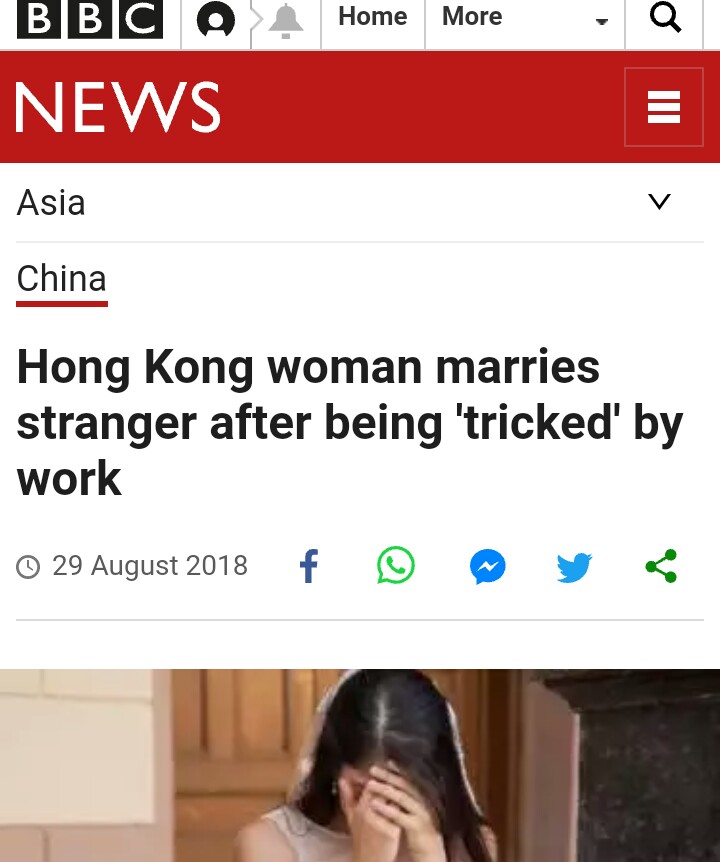 Read More
Reply · Share · 3.6k Views · Report · 1
Attention
We use cookies to serve you better. We have to let you know this in accordance with EU laws. You accept our terms and conditions by using this platform. Please Click on the OK button below to hide this message
OK, I Accept