All is now set for the 2019 edition of the Chinua Achebe Literary Festival which will hold this Saturday in Akwa, the Anambra State Capital.

This was contained in a statement issued by the State Coordinator of the Society of Young Nigerian Writers, (Anambra State Chapter), Mr. Izunna Okafor who is also the convener of the event.

He said the event will draw the participation of literary enthusiasts and figures, writers of all class, and intellectuals from different parts of the country, and will feature, among other literay packages: lectures in memory of Achebe, dramatizing of Achebe’s selected books, Open Mic/Spoken Word, Chinua Achebe Essay Writing Competition (for secondary school students, sponsored by the Anambra Newspapers and Printing Corporation), unveiling and presentation of the Chinua Achebe Poetry/Essay Anthology entitled "Arrows of Words" (which is the association's newest collection of poems and essays published in honour of Achebe), award presentation, and many more...

According to him, the literary festival which holds annually since 2016 is organized by the Society of Young Nigerian Writers, (Anambra State Chapter) in honour of Nigeria's literary legend and father of the African Literature — Late Prof. Chinua Achebe who died in March 2013, in commemoration and celebration of his immense contributions and legacies in the literary field.

While unveiling the 2019 theme of the event — 'Intellectuals And National Development: The Chinua Achebe Approach' Izunna described it as apt, given the rueful position of Nigeria today on the developmental ladder, and the envisaged roles the intellectuals have in fixing it, using Chinua Achebe as a benchmark.

It would be recalled that Late Achebe, until his death, was a die-hard chauvinistic countryman who, with his wealth of knowledge, contributed immensely in propelling the developmental wheel of his country Nigeria, Africa and the world at large. He was also an intellectual with integrity, as evidenced by his two-time rejection of the country's second highest award for intellectual achievement and contribution to National Development —the Commander of the Order of the Federal Republic — in 2004 and 2011 respectively, simply because he perceived things were not going the way they should in the country, as under-development, corruption and impunity were the order of the day.

'This auspicious theme,' Izunna says, 'will be further dissected at the literary festival by an international award-winnig actor and author R.C (Reginald Chiedu) Ofodile who will be the lead paper presenter and Guest Lecturer at the event.'

He further disclosed that the literary festival which is done in collaboration with the Anambra State Library Board will be declared open by H. E. Chief Dr. Willie Obiano, the Executive Governor of Anambra State, who will grace the occasion as the Chief Guest of Honour.

Furthermore, it enumerated the Royal Fathers of the day to include:

(The raditional Ruler of Ogidi Kingdom)

(The Traditional Ruler of Ndikelionwu)

(The Traditional Ruler of Obosi)

The statement reads: "Participation in the 2019 Chinua Achebe Literary Festival is  absolutely FREE and open to all. 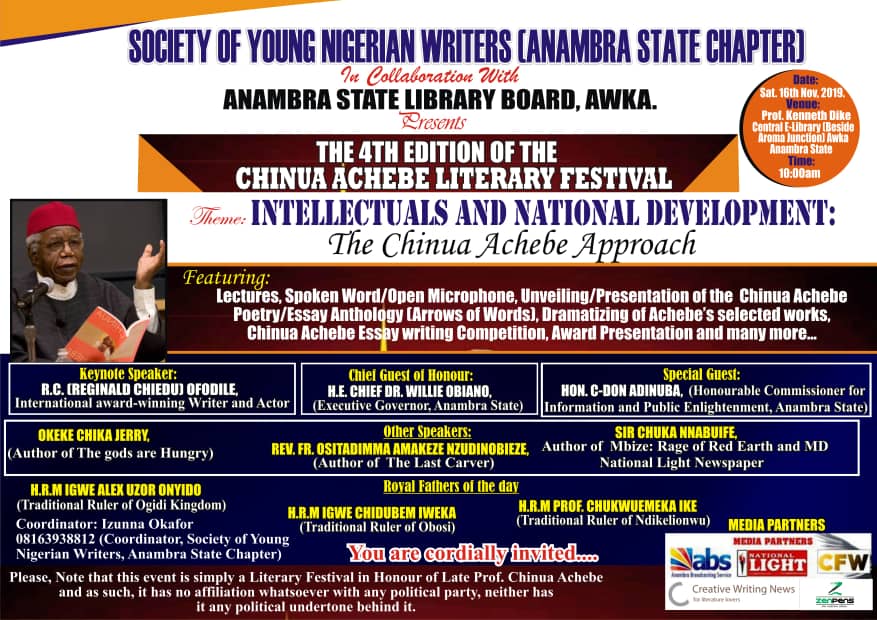