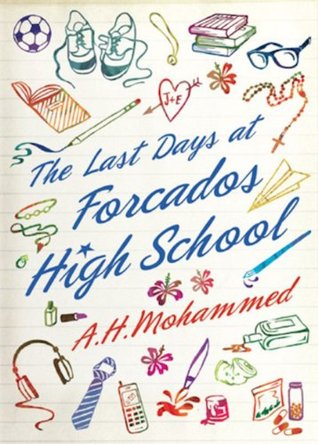 Author: A.H Mohammed
Genre: Young Adult
Jimi Solade is the brightest star at the elite Forcados High School. He has good looks, brains and is the captain of the football team. It’s his last year in senior secondary, and together with his friends- the sweethearted devout Nene and Ansa the nerdy art genius- he’s determined it’s going to be his best year yet.
But rogue brother, Wole, is back-which means trouble can’t be far behind. Then there’s Efua, the beautiful and mysterious new girl in class who seems to have no time for boys. And when Jimi’s mother falls ill, he realizes that things are about to change – and not necessarily in a good way. Can the smooth and confident Jimi handle this tumultuous final year, or will it be too much even for him?

A funny and brutally honest story about tolerance, self discovery, family, friendship and life on the brink of adulthood. THE LAST DAYS AT FORCADOS HIGH SCHOOL was adopted by JAMB UTME 2015

3 Likes · In 5 Libraries · Rated 9 times · Report
6.4k views
Login Or Register To Write A Review
You have not written any review on this book. Write one if you have read the book or plan to read it. You can always edit your review later
THE LAST DAYS AT FORCADOS HIGH SCHOOL by A.H Mohammed

9jaBooks, Ebook Publishers
Posted 7 Years ago · 0 Likes · 0 Comments
Jimi Solade is woken up by his brother Wole. He is so happy to see him as Wole is not always around because of some crime he committed. Jimi rushes to prepare for school as it is the first day of the school year and he was going to be in SS3. He comes to take his breakfast when suddenly his father walks in, seeing Wole , flares up. His wife Mrs Solade pleads with him to forgive Wole (we are made to understand that Wole had forged his father’s signature and made away with a lot of money leaving his father almost bankrupt).
Jimi gets to school with his best friend Ansa just before the Morning Assembly. As the students march into their classroom, jimi is seen to be everyone’s favorite boy. He is said to be smart and friendly. Ansa his friend is only good at Painting.

A new girl Efua Coker is admitted into the school, which is queer because students are not normally admitted into SS3. She is very beautiful, brilliant but strangely quiet and rudely shuns every boy that comes her way. She is seen not to have time for boys. She becomes friends with Nene Ekpo who is a mutual friend of Jimi and Ansa. Jimi leaves his favorite girl Caro to see if Efua could give him some attention but Efua seems to hate him.

A youth corper Miss AgbeneNovi is sent to Forcados High School to assist in English Language, she and Efua becomes friends after Efua was humiliated at the Mid-term Dinner by mistakenly being poured drink by Jimi; she gets to talking with her and finds out that Miss Novi belonged to a group for the support of Women and Child’s right as well as some charity work. Efua joins the group and is soon seen busy with campaigns and Rallies.

Jimi’s Mum dies of Ovarian Cancer, and is buried at a private cemetery. Their Father travels out of the country on a business trip leaving just Wole and Jimi with some money to take care of themselves. Wole goes wild as he throws parties in their house all the time, he invites his friends over while the smoke Heroine. All these become unbearable for Jimi as his grades constantly drop in school. Ansa, Nene and Efua helps him out by convincing him to stay in Ansa’s house. Gradually he gets better.

Nene goes to take her Biology book from Efua’s house, Efua’s aunt tells her to take it from her room as she was not around. When Nene was reading her book, she sees a piece of paper with Efua’s hand writing on it, it contained Efua’s deepest thoughts of her being in Love. When Nene flips it over she sees a letter addressed to Miss Novi telling her how much she treasured their hugs and how she was in love with her. Nene is shocked and just then sees Jimi, she calls him and shows him the letter after making him swear never to show anyone.

The letter is seen everywhere as someone had made photocopies of it. The school gets wild and the principal calls Efua and Miss Novi to his office, Efua explains that the letter was a mere thought as it was harmless. The Principal agrees but tells Efua to stay away from school for the rest of the day, The students are reprimanded for turning the school upside down for the letter they found, Jolly the boy who photocopied the letter is addressed and Miss Novi is sent to another school.

Efua is sick and in the hospital, Nene comes to see her and she tells Nene how she had been sexually abused by her step father leading to her running away from her former school. Nene pities her and swears to protect her in school; and she did.

Wole steals the key to the schools Chemistry lab from Jimi’s school bag, he and his friends makes away with the new microscope and tries to sell it but they are caught.Wole says it was Jimi who gave him the keys, Jimi agrees just so he could save his brother. He is isolated from the rest of the students during their WAEC exams. He is made to apologise to the whole school. But Efua stood up for him and asked the principal series of questions ,in the end AAnsa tells everyone that it was Jimi’s brother who stole the equipments, Jimi had nothing to do with it, he was only standing up for his brother.

Everything is settled. Charges against Jimi are dropped. T heir results are out and excellent. Jimi looks for Efua to thank her but she was nowhere to be found. Nene tells him that Efua already left the country.


Review written by Chinemerem Onuorah, you can get more information about the book by contacting her on Twitter @Mererah https://twitter.com/mererah or phone +2348108221203
Reply · Share · 13.6k Views · Report
Attention
We use cookies to serve you better. We have to let you know this in accordance with EU laws. You accept our terms and conditions by using this platform. Please Click on the OK button below to hide this message
OK, I Accept