After The Juju Man 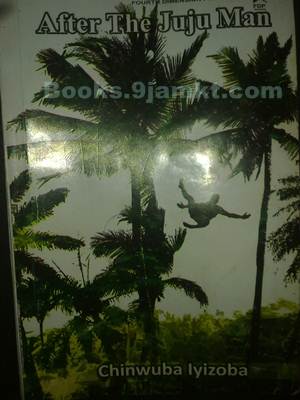 Author: Chinwuba Iyizoba
Genre: Fiction
The story is a tragedy of Okafor, a village palm wine tapper, who fell from a palm tree and fractured his leg. Relations carried him miles away, to the home of a witch-doctor, or “Juju-man”. According to some people, this wise and grey-haired old man had mystical powers. After greetings, gifts were presented. The Juju-man examined the injured man, invoked the gods of the land and poured a libation. Then he caught a cock, broke one of its legs and said to Okafor: “The day you see this cock walk, you will walk.”

1 Likes · In 1 Libraries · Rated 2 times · Report
1.9k views
Login Or Register To Write A Review
You have not written any review on this book. Write one if you have read the book or plan to read it. You can always edit your review later
After The Juju Man by Chinwuba Iyizoba

Ekene Onuorah
Posted 51 Years ago · 0 Likes · 0 Comments
After the Juju-man is a classic -- a story of life in West-Africa before the arrival of the Whites. It tells of the struggles of a man named Okafor whom at last died of injustice. Not only was it a tragedy that he died, his sincere In-law died too to bring out the truth and to cleanse the village of Izagu. Okafor disobeyed his father to become a palm-wine tapper, instead of the farmer his father prepared him for. It was later that Okafor revealed to his son Ikenna that his refusal was to stop trouble since his father’s second wife, along with children meant evil for him if he walked into the land.
As an unsuccessful palm wine tapper, he fell from the tree and broke his leg. His brother-In-law Okoye meant well for him by taking him to a distant village, Umuoru, because the healer they had in Izagu was powerless and fake. This almost caused trouble but the elders believed Okoye since his son and wife were victims of fake healers.
At Umuoru, Nweke did wonders with the cock he handed back to them. Okafor was healed when this cock began to walk and many were happy. But Okafor wanted to do more. He believed he needed to appease his late father by becoming a farmer, but his half-brothers were an obstacle to giving him the land which was rightfully his. Ekene convinced Ukaegbu to give him the land, citing that he would still fail.
But the brothers were disappointed. With help from Okoye, Okafor became one of the wealthiest at the next harvest that he decided to take an “Ozo” title. Ukaegbu did all to stop him, even by claiming his land and by beating his wife. This made Okafor fight Ukaegbu which attracted the public; it wasn’t good for a man about to be given an Ozo title. The case was to be settled at the shrine but no one knew that Ojiugo has been bribed to poison Okafor, except the planners. Okafor and Ukaegbu took the oath by drinking poisons, but Ukaegbu had the anti-dote.
Okafor died and was given a burial fit for a dog. Okoye knew that there was a problem so travelled to invite a stronger deity Aligome to come and cleanse their land. This deity would go with the person who invited it after it had done its work. Okoye knew this and was ready to make the sacrifice. He knew that it would still cost innocent lives if evil prevailed.
Aligome was invited and the village purged. Those who did evil were punished and the village became a place worth living. But it was time for Okoye to go. From his death bed, he heard the news of Whites coming to trade slaves. He told his nephew Ikenna, the son of Okafor, that evil sometimes brings something good, and urged him to ask them to give him the message if he ever meets them. The boy was really confused but agreed while Okoye died in his hands. He was given a befitting burial.
I am guessing this message would be Christianity or Technology or Civilisation.
Reply · Share · 6.3k Views · Report
Attention
We use cookies to serve you better. We have to let you know this in accordance with EU laws. You accept our terms and conditions by using this platform. Please Click on the OK button below to hide this message
OK, I Accept