The Hobbit, or There and Back Again 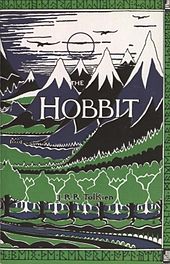 Author: J. R. R. Tolkien
Genre: Fantasy
Gandalf tricks Bilbo into hosting a party for Thorin and his band of dwarves, who sing of reclaiming the Lonely Mountain and its vast treasure from the dragon Smaug. When the music ends, Gandalf unveils a map showing a secret door into the Mountain and proposes that the dumbfounded Bilbo serve as the expedition's "burglar". The dwarves ridicule the idea, but Bilbo, indignant, joins despite himself.
The group travel into the wild, where Gandalf saves the company from trolls and leads them to Rivendell, where Elrond reveals more secrets from the map. Passing over the Misty Mountains, they are caught by goblins and driven deep underground. Although Gandalf rescues them, Bilbo gets separated from the others as they flee the goblins. Lost in the goblin tunnels, he stumbles across a mysterious ring and then encounters Gollum, who engages him in a game of riddles. As a reward for solving all riddles Gollum will show him the path out of the tunnels, but if Bilbo fails, his life will be forfeit. With the help of the ring, which confers invisibility, Bilbo escapes and rejoins the dwarves, improving his reputation with them. The goblins and Wargs give chase but the company are saved by eagles before resting in the house of Beorn.
The company enter the black forest of Mirkwood without Gandalf. In Mirkwood, Bilbo first saves the dwarves from giant spiders and then from the dungeons of the Wood-elves. Nearing the Lonely Mountain, the travellers are welcomed by the human inhabitants of Lake-town, who hope the dwarves will fulfil prophecies of Smaug's demise. The expedition travel to the Lonely Mountain and find the secret door; Bilbo scouts the dragon's lair, stealing a great cup and learning of a weakness in Smaug's armour. The enraged dragon, deducing that Lake-town has aided the intruder, sets out to destroy the town. A noble thrush who overheard Bilbo's report of Smaug's vulnerability reports it to Bard, who slays the dragon.
When the dwarves take possession of the mountain, Bilbo finds the Arkenstone, an heirloom of Thorin's dynasty, and steals it. The Wood-elves and Lake-men besiege the mountain and request compensation for their aid, reparations for Lake-town's destruction, and settlement of old claims on the treasure. Thorin refuses and, having summoned his kin from the mountains of the North, reinforces his position. Bilbo tries to ransom the Arkenstone to head off a war, but Thorin is intransigent. He banishes Bilbo, and battle seems inevitable.
Gandalf reappears to warn all of an approaching army of goblins and Wargs. The dwarves, men, and elves band together, but only with the timely arrival of the eagles and Beorn do they win the climactic Battle of Five Armies. Thorin is fatally wounded and reconciles with Bilbo before he dies. Bilbo accepts only a small portion of his share of the treasure, having no want or need for more, but still returns home a very wealthy hobbit.

The Hobbit, or There and Back Again, better known by its abbreviated title The Hobbit, is a fantasy novel and children's book by J. R. R. Tolkien. It was published on 21 September 1937 to wide critical acclaim, being nominated for the Carnegie Medal and awarded a prize from the New York Herald Tribune for best juvenile fiction. The book remains popular and is recognized as a classic in children's literature.

2 Likes · In 0 Libraries · Rated 3 times · Report
3.1k views
Login Or Register To Write A Review
You have not written any review on this book. Write one if you have read the book or plan to read it. You can always edit your review later
The Hobbit, or There and Back Again by J. R. R. Tolkien

Ekene Onuorah
Posted 8 Years ago · 0 Likes · 0 Comments
Whether children's or adult's, I think everyone enjoyed reading the story. The Hobbit both as a creature and as a classic novel is genuine. While reading, you can't think of having read something like this, unless you have read something copied from it. I particularly loved the theme of Bilbo not caring what others may think of him going for an adventure. It happens in the world today. And I was glad that he came back very rich, even though I was sad that Thorin died. That's why it's fiction. An Enchanting prelude to the Lord of The Rings series. Very interesting.
Reply · Share · 6.3k Views · Report
The Hobbit, or There and Back Again by J. R. R. Tolkien

9jaBooks, Ebook Publishers
Posted 8 Years ago · 0 Likes · 0 Comments
A great story
Reply · Share · 7.9k Views · Report
Attention
We use cookies to serve you better. We have to let you know this in accordance with EU laws. You accept our terms and conditions by using this platform. Please Click on the OK button below to hide this message
OK, I Accept