Terry Goodkind 631 views
Terry Goodkind (born in 1948) is an American writer and author of the epic fantasy The Sword of Truth series as well as the contemporary suspense novel The Law of Nines, which has ties to his fantasy series, and The Omen Machine, which is a direct sequel thereof. Before his success as an author Goodkind worked primarily as a painter, as well as doing carpentry and woodworking. Goodkind is a proponent of Ayn Rand's philosophical approach of Objectivism, with references to Rand's ideas and

Terry Goodkind, a male author is from Omaha, Nebraska, USA 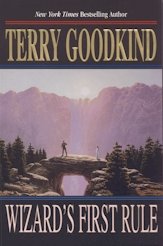 Wizard's First Rule
Terry Goodkind
Attention
We use cookies to serve you better. We have to let you know this in accordance with EU laws. You accept our terms and conditions by using this platform. Please Click on the OK button below to hide this message
OK, I Accept